How to Build Stronger Abs in 22 Days

Abs can be trained in a variety of ways. Many people may start a new abdominal workout just to drop out after a few days. But there is some evidence which suggests that if you perform a routine for 22 days you are well on the way to develop a new habit. This type of habit can turn your abs workouts into a permanent routine, which is what you want if you need to develop the core`s muscles.

Where it all started

In the 50`s, American plastic surgeon Maxwell Waltz saw a pattern of psychological reactions in his patients. After undergoing surgery, his patients would take 21-22 days to get used to the changes in their body. These changes would, most of the times, meant the patients would have to get used to the new physiological changes on a psychological and emotional level. Thus comes the 22 habit-formation theory.

Today`s evidence shows a more complex approach to habit formation. A study published in The European Journal of Social Psychology found that habit formation can take anywhere from 18 to 200 days:

“The time it took participants to reach 95% of their asymptote of automaticity ranged from 18 to 254 days; indicating considerable variation in how long it takes people to reach their limit of automaticity and highlighting that it can take a very long time. Missing one opportunity to perform the behavior did not materially affect the habit formation process. With repetition of a behavior in a consistent context, automaticity increases following an asymptotic curve which can be modeled at the individual level.” How are habits formed: Modeling habit formation in the real world; European Journal of Social Psychology, 2009.

What we can learn from this study is that forming habits can vary from individual to individual. It is also possible to form a habit if you would skip one opportunity, or in this case, one day, in which to perform that particular habit. In many cases, forming habits is much more personal to be applied as a general rule.

How to apply the theory for stronger abs

Since the approach is thus much more individual it would be beneficial if you could commit for at least 22 days for stronger abs habits. Since you will be performing a new workout it may be possible to find an exercise pattern which you actually enjoy. But the key is to always have the possibility of increasing the difficulty with the exercises. This can be done by increasing the time spent performing the exercise or increasing the repetitions for each movement. 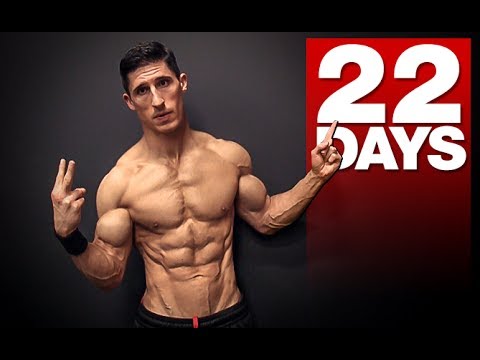 The circuit-style workout is perfect for strong abdominal muscles. It works not only for advanced fitness enthusiast but also for the beginner. The circuit principle is straightforward. It implies performing an exercise for 45 seconds before taking a limited 10 seconds resting time.

Leg raises are among the best exercises for abs. The exercise targets the lower abdominals and is also a great tool to improve balance and coordination. To perform the exercise you can lie on the floor with your palm towards the ground under the glutes. You will then raise your legs perpendicular to the ground as controlled as possible and return to the starting position. If you can perform the movements for more than 45 seconds you will do so until you fatigue before moving to the next exercise.

Planks are isometric exercises which target the core`s stability and strength. Maintaining the plank position for a few minutes is not impossible for the advanced trainers. But if you`re just starting out on your abdominal training, planks can be a struggle. When you keep the position on your bent elbows you might be tempted to raise or lower your core.

The whole concept is based on abdominal activation. You know you are performing the exercise in a correct way when you feel abs activation and not the lower back as so many people do. You will gradually increase in strength until you can maintain the position for 45 seconds and more. After you can`t maintain the position anymore, you rest for 10 seconds and move on to the next exercise.

Bicycle crunches are among the best exercises for controlled abdominal movements. They target the whole central area of the abdominal muscles as they involve the legs and the upper body. To perform the movement you need to keep your hands behind your head. You will then move the right elbow towards the left raising knee and then the left hand towards the right raising knee. Make sure the movement is controlled from start to finish. When you can`t do the movement anymore, you progress to the next exercise.

Training the obliques should be part of any core workout. The muscles provide a crucial stabilizing role and you can train them with a crunch variation. When you perform the classic crunch you will turn your body to the right and then to the left every time you get into the elevated position. When you can`t perform the exercise anymore you take 10 seconds resting interval and move on to the next exercise.

The final exercise is a mix between planks and bicycle abs exercises. It works all of the abdominal muscles raising your heart rate also. It is a good exercise to burn fat, develop stronger muscles and improve stability and functional movements of the core. You will perform this movement for 45 seconds. If you can go further you will target another 45 seconds.

The habit of complete workouts

To build stronger abs in 22 days is not easy. But it will certainly make your goal easier if you perform this movement every day. You can take a day off from time to time, as even research suggests this will not stop you from developing the habit.

By limiting the resting intervals to 10 seconds you are really challenging your body to push beyond what you think is achievable. But the goal is not to perform as many repetitions as possible in 45 seconds intervals, but to perform them correctly which will fatigue the muscles faster. These exercises are bodyweight only and this means you can perform them anywhere while following your workout goals.

After 22 days you will see a new strength level in the abs. From there, you can add another exercise to the workout or switch the exercises to challenge the muscles further.